Bursting with flavour, aroma and heat, India’s street food is one of the country’s star attractions. We spoke to Solos’ Marketing Executive, Neena Seghani, to find out what she recommends you treat your taste-buds to on a tour of India and its street food.

What is India most famous for? After the Taj Mahal – officially recognised one of the seven Wonders of the World – the country’s steaming street food definitely comes in at a close second.

Diverse, delicious and found down almost every street inside India’s main cities, it’s every foodie’s dream – and with so much to try, it’s impossible to get bored!

Neena, Solos Marketing Executive, originates from Gujarat, India’s westernmost state, but her family cook up all kinds of dishes from all corners of the country. To help you taste the best of the best on your trip to India, she’s given us her top 10 vegetarian street food favourites that she thinks everyone should try…

“This is one of the most famous street foods in India. It’s a puri, a type of deep-fried bread made out of chapati flour and shaped like a shell, filled with boiled potatoes, chickpeas, onions and a minty-flavoured water.

You’ve got to drink it like a shot to taste all the flavours together – if you try biting into it, everything will pour out!”

“This dish uses ‘sev‘, crunchy Indian-style noodles made out of chickpea flour. Mixed with these are peanuts, onions, coriander, chickpeas, tamarind sauce – which gives the dish its flavour – and puffed rice.

My family cook this at home as a snack, starter or main dish, but it’s also an excellent street food dish that you can find all over India.” 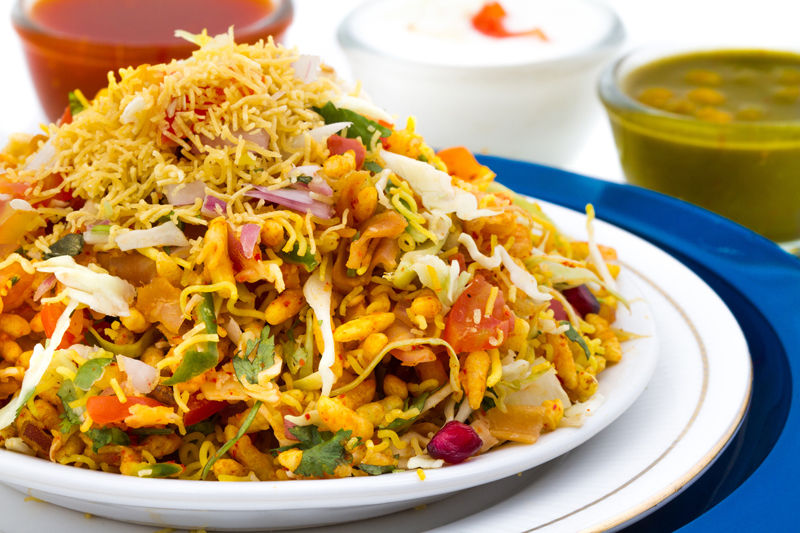 “Popular in Mumbai – both on street food stalls and in restaurants – pav bhaji is a thick, spicy curry made with boiled vegetables, cauliflower, sweet potatoes, potatoes, aubergines, ginger, pureed fresh tomatoes and a masala sauce.

You eat the curry with lightly toasted, buttered Indian rolls. It’s amazing and definitely one of my favourites – my mouth’s watering just talking about it!”

“Spicy, sweet and tangy, sev puri is another great street food snack. It’s similar to pani puri in the way that it’s eaten all in one – like a shot – and also uses ‘sev‘, the Indian-style noodles used in bhel puris.

Made with natural yoghurt, potatoes, onions, tomatoes and chaat powder – which gives it its unique flavour – you eat these with an assortment of chutneys: green chutney, sweet tamarind chutney and a spicy chutney made from red chilies and garlic.

“Dosas traditionally come from South India and are basically big pancakes filled with different ingredients. My favourite is what’s called a ‘masala dosa‘, a variation that’s filled with a delicious potato and onion dry curry.

I love to dip the dosa in dahl and coconut chutney. People in India will eat this street food dish at anytime throughout the day, but it’s particular popular as a breakfast snack.” 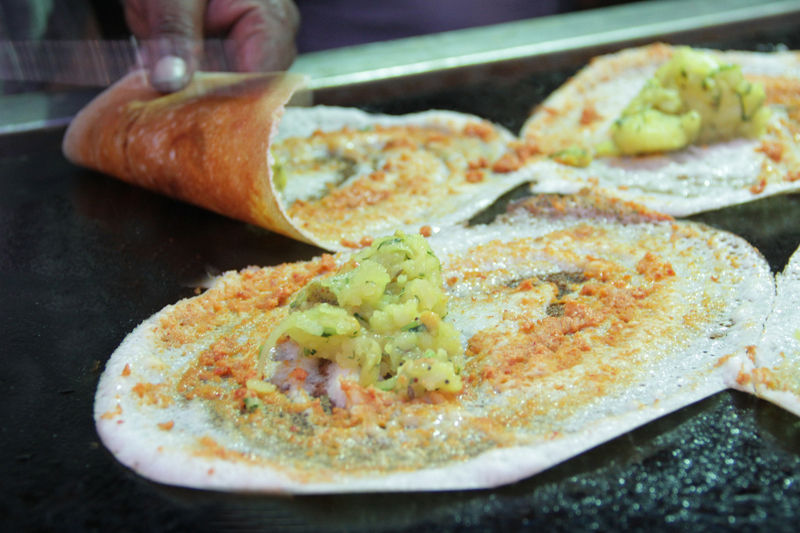 “Vada pav are what we like to call Indian burgers! This street food snack is basically like a bhaji in a roll, so you can see why everyone loves them.

Boiled potatoes, ginger, chilli, boiled peas and turmeric powder are mashed up into balls, dipped in spiced batter and fried. You’ll often find this served with a delicious green chutney, made from coriander and mint.”

“I love samosa chaat! This dish uses the normal fried samosas we’re all familiar with (being vegetarian, I only eat the vegetable samosas) but added to a bowl of black chickpeas, sev and boiled potatoes.

They’re then topped with natural yoghurt, green chutney and tamarind sauce, with a bit of chaat masala for some added flavour.”

“This dish actually comes from Gujarat – the region of India me and my family are from. The western state is now famously known for the street food snack, which is a type of Indian-style burger.

It’s basically a mixture of boiled potatoes, dabeli masala and tamarind chutney in a bun, topped with fried peanuts and onions. 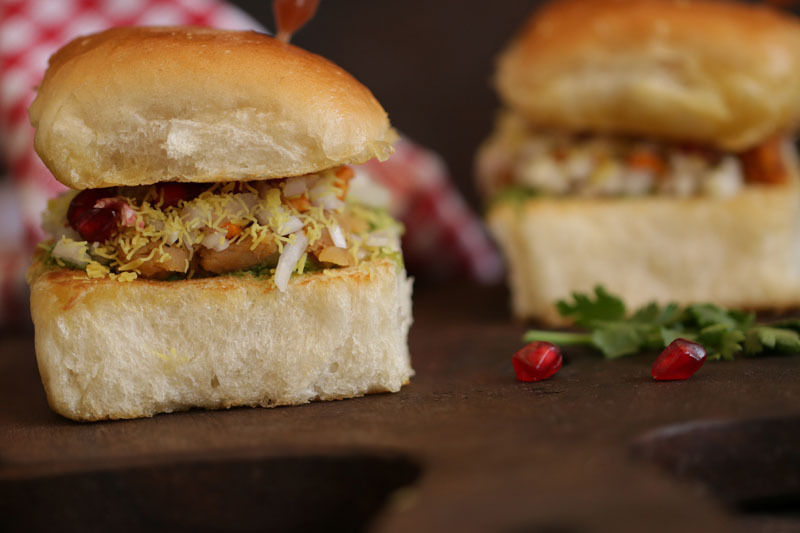 “This is a famous dish found all over India – and in the UK too. Thin slices of potato are blended with fresh ginger, garlic and green chilli paste; the mixture is then battered and fried until crispy.”

It’s pretty unhealthy, but definitely worth it!”

“Last but not least, this spicy chickpea curry is traditionally served with a fried bread called bhatura.

It’s a very filling dish that’s most popular in India’s Punjab region, but again, you can find it almost anywhere.” 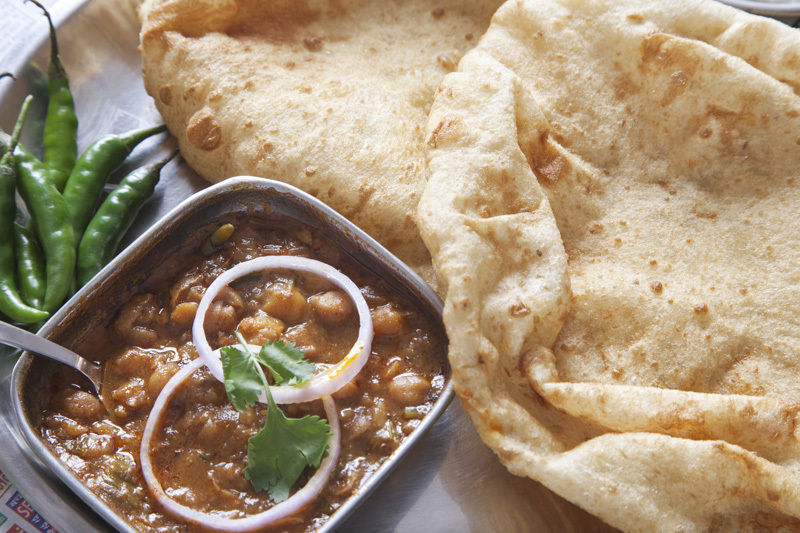 “Monday to Friday I drink English tea, but every weekend I take the time to make myself some traditional Indian Masala Chai!

A spicy, flavoursome tea blended with aromatic spices and herbs, it’s worlds apart from English tea, but – in my opinion – so much better.

In the UK we drink it in large mugs, but in India they drink it in tiny cups – and it’s taken almost like a shot.” 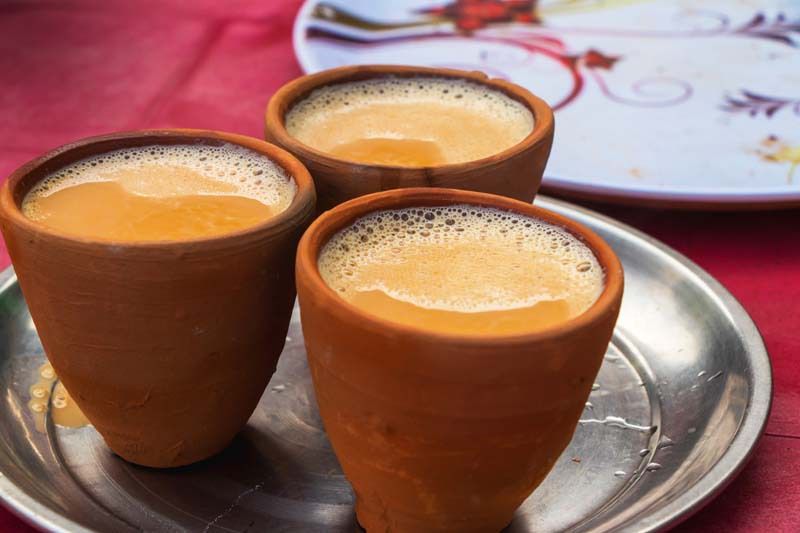 “Another typical drink found everywhere in India is the lassi. Made from natural yoghurt, salt or sugar and spices all whisked together, it’s super simple to make at home.”

You can choose between sweet or salty variations, but I personally prefer salty lassi – made with salt instead of sugar.” 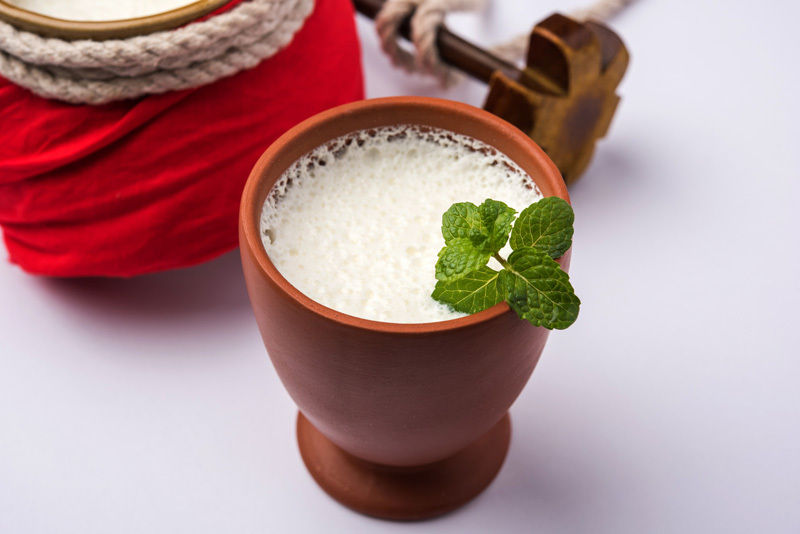 Is your mouth watering yet? Put your taste-buds to the test on our 10-night tour of the fascinating Indian region of Rajasthan, departing 15th February 2020. Click here to find out more information.

Share:
« 5 ways to combat nerves before your first singles holiday
Back to blog
Top 5 places to see in Vietnam »