Often described as the green heart of Italy, the beautiful region of Umbria is something of an undiscovered gem amongst British tourists. Read our Umbria travel guide to find out 5 reasons why this region should be on your radar, and the best time to visit.

Not only this, Umbria also offers excellent value for money when compared to more tourist-heavy regions such as Tuscany, helping you avoid exorbitant prices and get more from your holiday for less.

Here are 5 more reasons why you should visit, and what to do while you’re there.

Like much of Italy, Umbria’s historical narrative is long, elaborate and forever fascinating, dating back as far as the 6th century.

Plus, by being the only region in Italy not bordered by the sea or another country, it’s also managed to keep its cultural identity intact.

Travel to Perugia, the region’s capital and largest city, to wander the cobbled alleyways and piazzas, passing solemn churches and Gothic mansions as you go.

In between coffee-stops at the trendy student-filled cafés, explore the centro storico (historic centre), which hasn’t changed much in over 400 years, and admire some of the best preserved frescoes of Italy’s Renaissance in The Collegio del Cambio.

The hill-top town of Assisi is another must-visit, home to the stunning two-story Basilica of St. Francis church, consecrated in 1253! 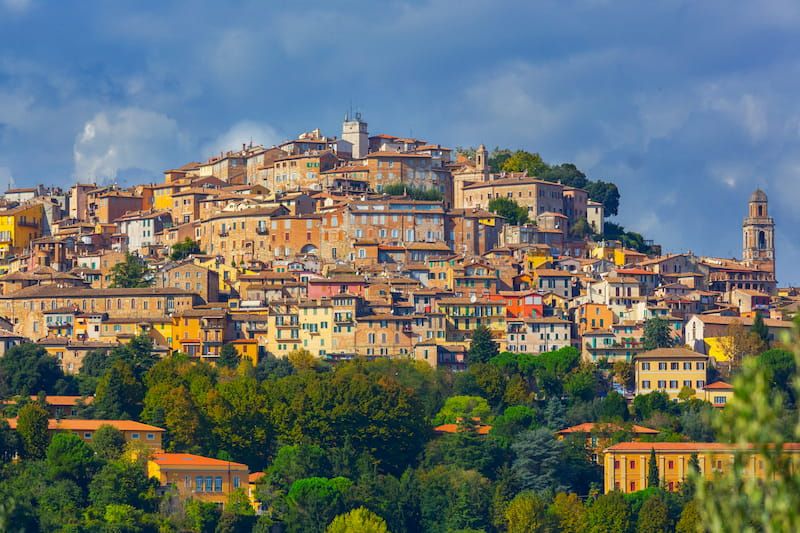 2) Wine-lovers will feel right at home

If you like wine, you’ve love Umbria. Although facing steep competition from neighbouring Tuscany, this region is where you’ll find some of the finest – and most undervalued – wines in the whole of Italy.

Orvieto, a crisp and peachy white wine produced in the Umbrian town of the same name, is the best-known. You’ll find it in almost every restaurant in the region, but it’s also exported all over the world.

Just outside Umbria, and surrounded by vineyards, the medieval hilltop town of Montepulciano is known for its noble red wine. Come here for wine-tasting, and to soak up the vast panoramas over the wonderful Val d’Orcia and Val di Chiana valleys that surround it. 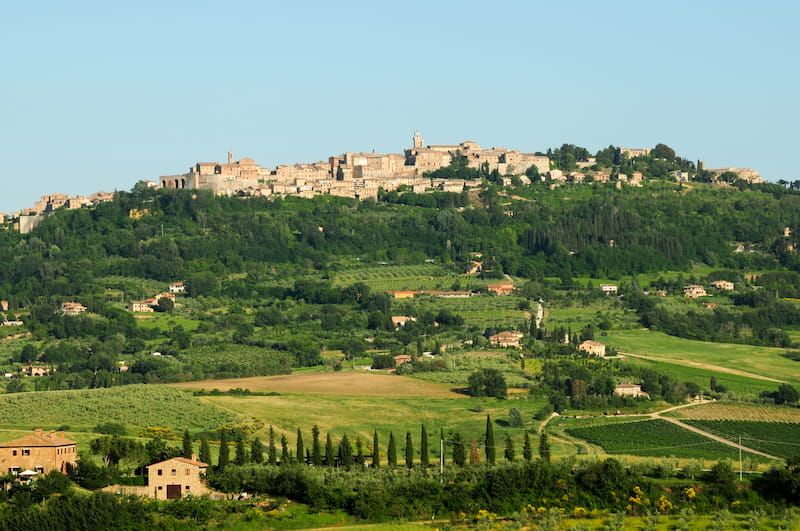 3) The food is out of this world

Foodies are in their element here, with tartufi neri (black truffles), fine cured meats and full-bodied local wines finding their way onto most regional menus.

Truffles are one of the region’s main specialities. You can even go truffle hunting in the forest surrounding the beautiful town of Trevi, afterwards enjoying a meal made from your finds.

Keen foodies should also try the highly-acclaimed chocolate in Perugia. In fact, the hosts a Eurochocolate festival each October, which attracts over 900,000 visitors from all over Europe looking to enjoy chocolate tastings and workshops! 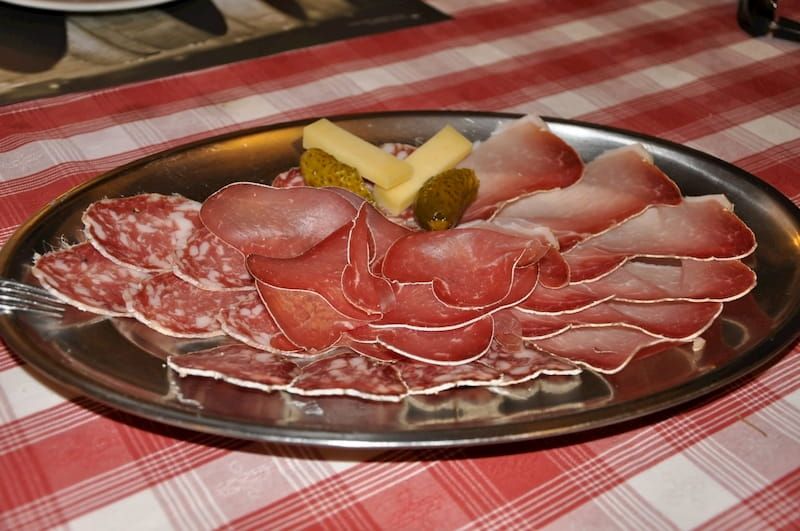 4) It’s great for exploring on foot

Picturesque forest trails, aromatic vineyards and miles of rolling countryside await. And, what better way to reward yourself after all your exercise than with a wine-tasting and hearty Italian lunch? 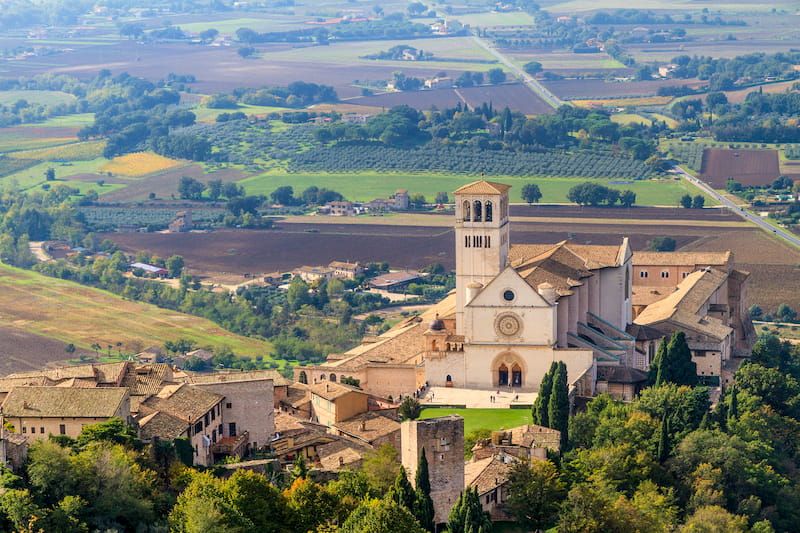 Umbria may not have a coastline, but it does have Lake Trasimeno.

The fourth largest lake in Italy, Trasimeno’s setting is what makes it so picturesque. Encased by mountains and tiny medieval stone villages, the river looks out onto the crumbling towers, fortresses, Renaissance churches and abbeys that punctuate the rolling countryside.

Come here at sunset and experience the leisurely rhythm of life that exists by the lakeside. 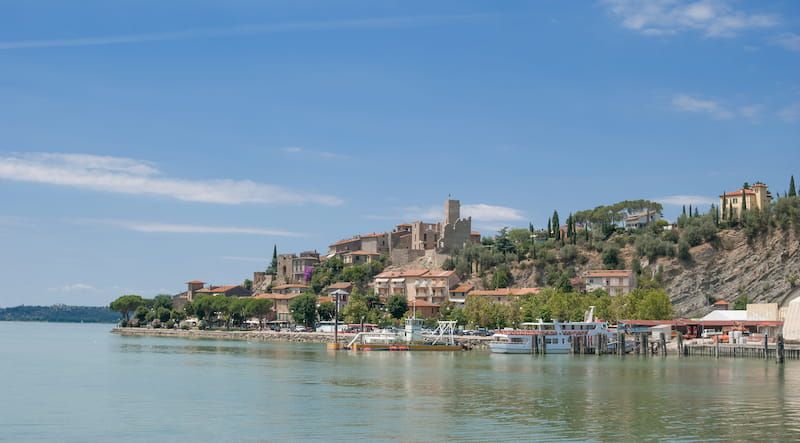 Early spring and summer and autumn are great times to visit Umbria, owing to the slightly cooler temperatures and quieter cities.

At the end of March the region enjoys temperatures of around 15°C to 17°C, heating up to a scorching 29°C come August.

However, visiting Umbria as late as November won’t mean you’ll be shivering in minus temperatures. The temperature often reaches a high of 15°C during the early winter months, making this an ideal time to go on a walking holiday or city break.

Are you ready to fall in love with Umbria? Join us this March on our Discovery tour to Umbria, taking in Perugia, Assisi, Montepulciano and more, or explore the mountain town of Trevi on foot on our foodie-inspired walking holiday.

Share:
« 10 of the best solo holiday destinations
Back to blog
6 of the greatest desert adventure holidays »