6 of the greatest desert adventure holidays

For a taste of otherworldliness mixed with adventure, choose a desert holiday. Here, we present to you the best desert adventures in the world, where mountains, ancient settlements and modern societies lie waiting to be discovered…

What’s more, contrary to what literature and films might have told you, they’re so much more than a desolate stretch of sand. Cradling deep valleys, looming mountains, rare wildlife and a touch of old-world charm, deserts are an explorer’s playground shrouded in intrigue.

Start your next desert adventure today, and read on to find out where you can enjoy the best desert holidays in the world.

The lunar-like landscape of Jordan’s Wadi Rum desert will truly make you feel like you’re on another planet.

Lying just south of the ancient city of Petra – also one of the Wonders of the World – Wadi Rum is famous for its red sands and awe-inspiring sunsets, which peek through the craggy mountains and rock formations.

There’s ancient history here too, having been once inhabited by the Nabataeans who left their mark in the form of temples, inscriptions and rock drawings.

Spend the night counting constellations and camping under the stars, or explore the desert’s dunes in a 4×4 or on the back of an Arabian horse.

Easily accessible from the capital city of Muscat, Oman’s vast and golden Wahiba Sands desert (also known as Sharqiyah Sands) stretches for up to 180km from north to south.

This is a desert that’s famous for its remoteness and spectacular sand dunes – some of which have been known to reach up to 100m high!

Although various camps have spring up over the years, the desert is free from any permanent settlements, a factor which helps it retain its mystical air.

For a desert holiday to remember, experience the thrill of a safari drive over the dunes, or even spend a night in a traditional Bedouin camp underneath a sky full of stars. 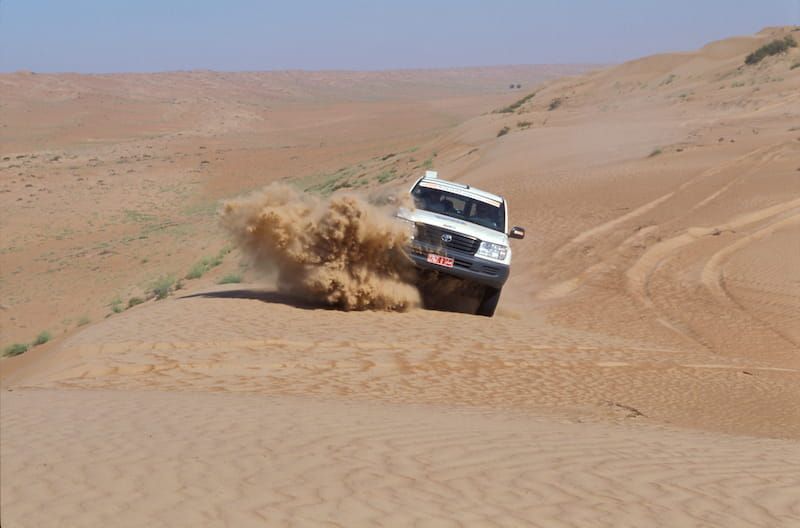 The UAE’s Rub’ al Khali desert, also known as the Empty Quarter, isn’t just any old desert – it happens to be the largest uninterrupted sand mass in the world, crossing Saudi Arabia, Yemen, Oman and the United Arab Emirates.

If you want to explore it without heading in too deep, Abu Dhabi is a great place to base yourself.

Sand skiing, dune bashing and camel rides are some of the desert adventures on offer here. But, when you’re not exploring this huge expanse of sand, Abu Dhabi offers more than enough entertainment with its towering skyscrapers, bazaars and museums. 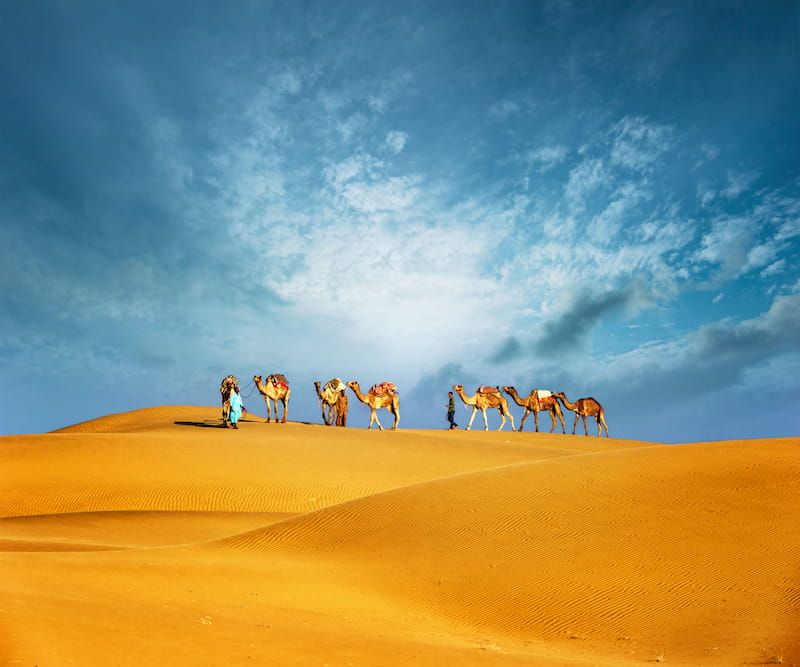 A holy pilgrimage town in India’s Rajasthan state, Pushkar hums with prayers, bells, drums and devotional songs. Surrounded by The Great Indian Desert, also known as the Thar Desert, Pushkar is a popular jumping off point for travellers looking to venture into the desert’s sandy dunes.

Hire a motorbike and explore independently, or stay overnight in one of the desert camps dotted around the town. It’s also surrounded by desert, which only makes this mystical town even more alluring. 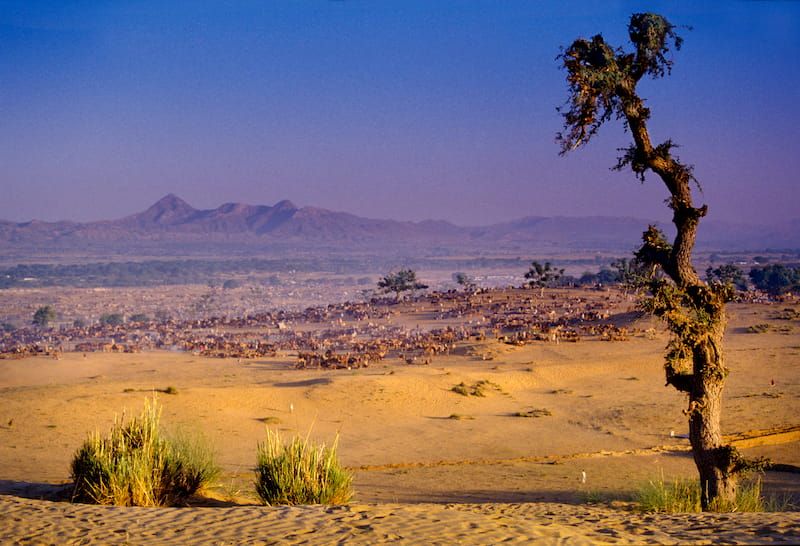 The land of the pyramids with over 3,000 years of history under its belt, Egypt is an explorer’s paradise.

The Western Desert, part of the Sahara, covers two-thirds of the country, making venturing into the desert an absolute must on your Egyptian holiday, wherever you’re staying.

Of course, a visit to the legendary Pyramids of Giza is a must-do, closely followed by a tour of Luxor’s Valley of the Kings – the burial ground for Tutankhamun. Cruise along the Nile and stay a few nights in Cairo to tick all the highlights off your list. 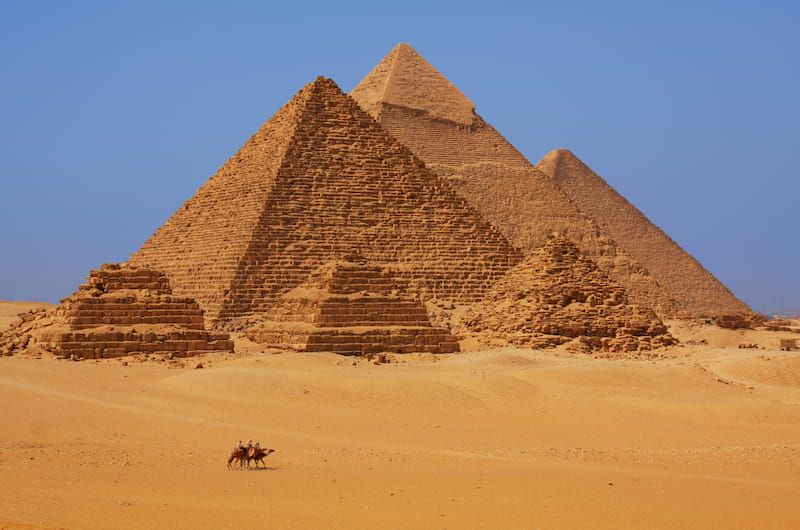 With much land covered by the Sahara Desert – the largest hot desert in the world – it goes without saying that Morocco is one of the best places for a desert holiday.

Stay in Marrakech for a few nights, before venturing into the desert to explore the many towns, villages and camps that reside there. Many travellers start at the oasis town of Erfoud, also known as the doorway to the desert, before heading deeper into the desert to see the beautiful Erg Chebbi dunes. Sweeping seas of sand formed by the wind, these burning-orange dunes can reach up to 150m high! 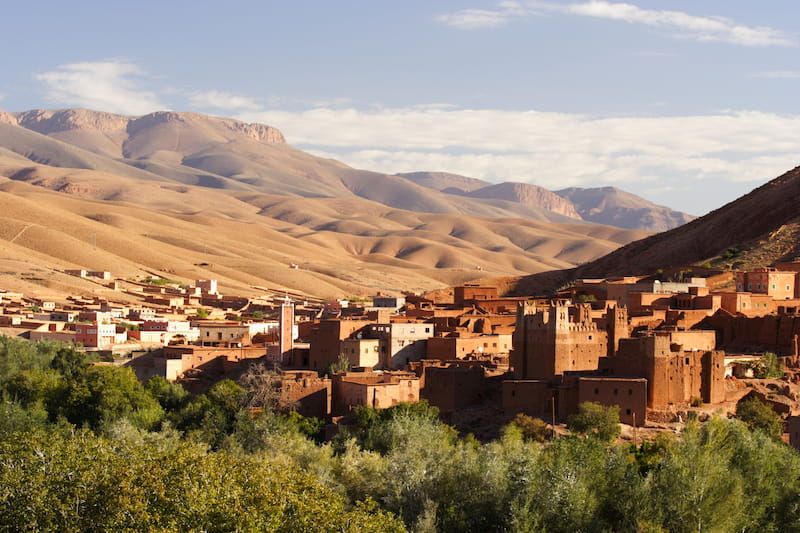 Share:
« 5 reasons to visit Umbria
Back to blog
European adventure holidays for singles »